Will we get better?

Health New Zealand and Te Mana Hauora Māori (the Māori Health Authority) formally arrive on Friday 1 July 2022. They represent a significant reorganisation in the management of Aotearoa New Zealand’s public health system. Their arrival is a huge opportunity to improve health outcomes, and their ability to deliver real change in the coming years will be a major test. It’s a lot of pressure, but we need this change to succeed. That’s why ASMS has launched our campaign “Will We Get Better?” – to ensure, while the new agencies are rolling out and being developing, that everyone is focused on the issues that really matter. 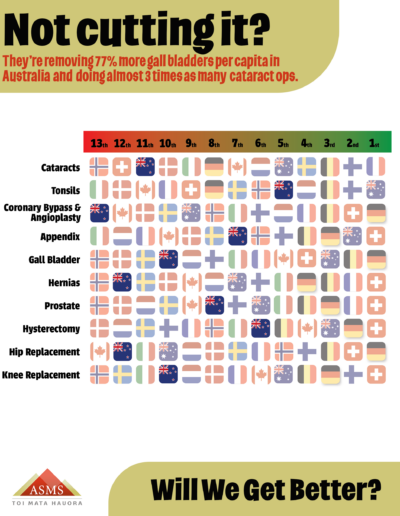 Operating rates per 100,000 people reflect many things: prevalence of underlying conditions, age profile of the population. But, also, capacity. You can’t operate without surgeons, anesthetists, nurses and other medical professions. And they need operating theatres to perform the surgery in. Compared to the 12 countries above, New Zealand doesn’t fare well across a range of surgery. And if you compare specifically with Australia, the flags may be similar but they are in very different positions. Still in the shadow of Omicron, the longer-term challenge looks even harder. So with Health NZ approaching, how #willwegetbetter? 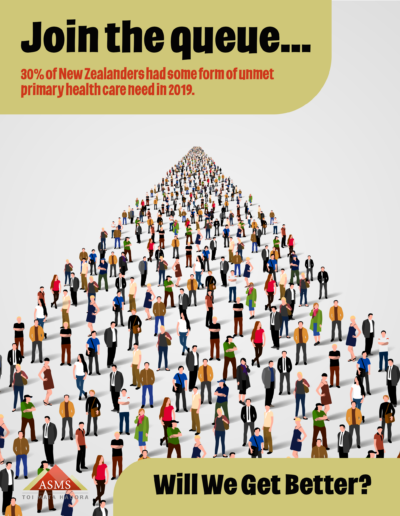 Will We Get Better – Join the Queue

According to the New Zealand Health Survey more than 30% of adults had one or more types of unmet need for primary health care in 2019. In 2011 it was 26%. The main reason cited was an inability to get an appointment within 24 hours.

Primary care has been a key theme in the build-up to the launch of Health New Zealand. But that unmet need says that improving primary care is going to be a big very challenge. #willwegetbetter? 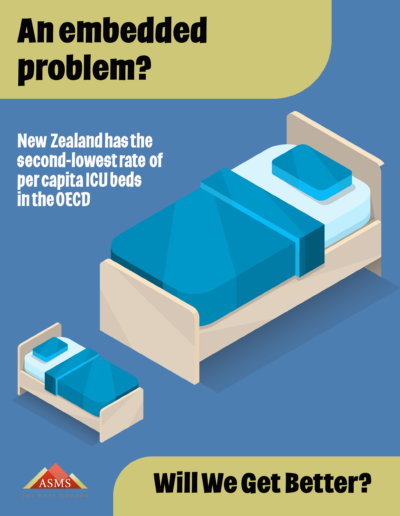 New Zealand has one of the lowest number of hospital beds per capita among 15 comparable countries. While the actual number of ICU beds has been contested in during the COVID pandemic our relative shortage of beds is not. New Zealand has the second-lowest level of ICU beds per capita among 22 OECD countries for which data is available, at 3.6 per 100,000 people – slightly better than Mexico. In 2018, prior to the COVID pandemic, 17% of elective surgical operations for which post-operative admission to an ICU was planned, were postponed in New Zealand due to the lack of an available ICU bed. That compares with 1.7% in Australia. Without the beds and without the staff #willwegetbetter? 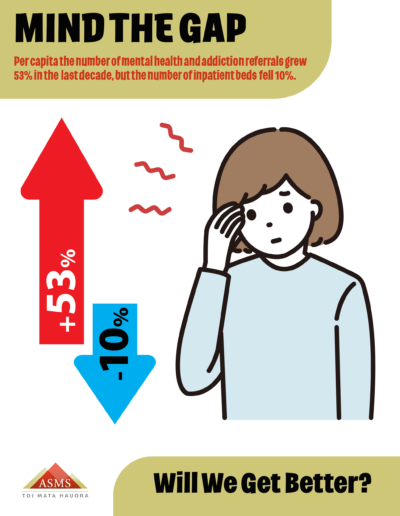 Will We Get Better – Mind The Gap

The number of new mental health and addition (MHA) referrals per capita seen by DHBs and contracted NGOs grew by 53% between 2011 and 2021. Yet the number of available inpatient MHA beds per head of population has fallen by nearly 10% in the last five years. The number of psychiatric beds per head of population is now among the lowest in the OECD. New Zealand’s psychiatrist workforce is also proportionately one of the smallest among comparable countries and is projected to decline further as a proportion of the population. In 2019 the Government committed to spend $1.9bn over the next four years in mental health and in 2021 it produced a new 10-year strategy. Yet, as ASMS research into the wellbeing of New Zealand’s psychiatrists found 35% reported have experienced burnout and 45% would like to leave their job. Under Health NZ, #willwegetbetter?

(SOURCE: Programme for the Integration of Mental Health Data) 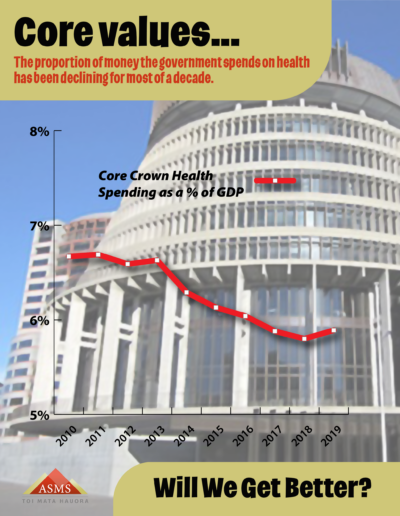 How much should the country be spending on health? Most people would say “more”. But – unfortunately – when measured as a proportion of our gross domestic product (GDP) Aotearoa’s spending has been dropping. Over the 10 years to June 2019, New Zealand’s Core Crown Health expenditure dropped from 6.7% of GDP to 5.9%. If Core Crown Health spending in 2019 were on 2010’s level, it would have included an additional $2.4 billion. With the arrival of Health New Zealand and the Māori Health Authority on 1 July 2022 the opportunities are enormous. But so are the risks. And, no matter how the resources under these two new bodies are organised, we need to be sure there is enough resource to start with. On 1 July #willwegetbetter? 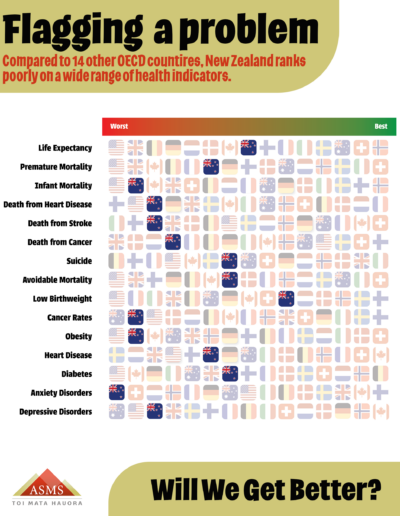 IT’S NOT LOOKING HEALTHY TO START WITH

With Health New Zealand and the Māori Health Authority formally launching on 1 July. Health Minister Andrew Little says “we need a system that works for everybody, no matter who you are or where you live”. It’s a big change for a health system already facing big challenges. Because – comparing internationally – New Zealand’s health is already starting towards the back of the pack.

If this was a race, we’re already well off the pace. If Health New Zealand is going to be a game-changer, how #willwegetbetter? 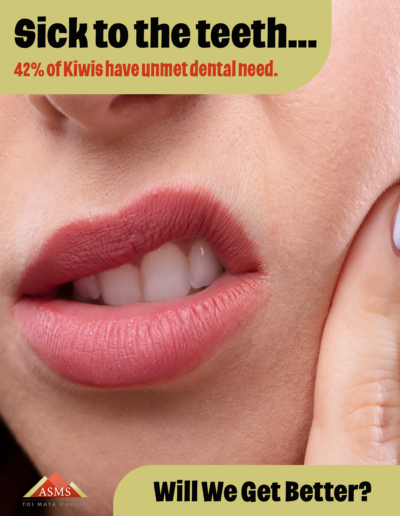 Will We Get Better – Sick to the Teeth

It’s a strange quirk of history that we treat oral health in New Zealand different to the health of the rest of our body. Dental care is the most privatised and least subsidised part of the system and often feels like the forgotten dimension to public health.

Untreated dental problems end up in our emergency departments as infections or other complications. In fact, hospitalisation rates for oral health increased by 31% from 2007/08 to 2018/19.

This year’s Budget fulfilled the Government’s electoral commitment to increase the Work & Income emergency dental grant from $300 to $1000. But does that mean they think it’s all done? #willwegetbetter? 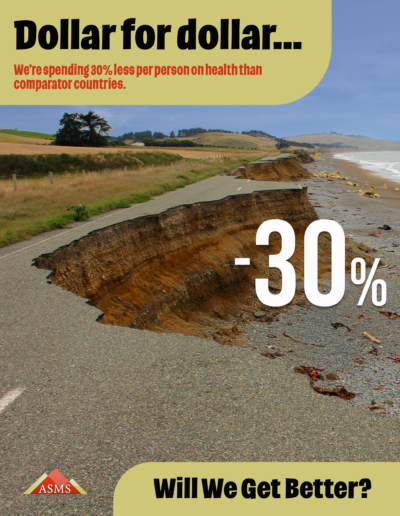 Will We Get Better – Dollar for Dollar

A WORLD OF DIFFERENCE 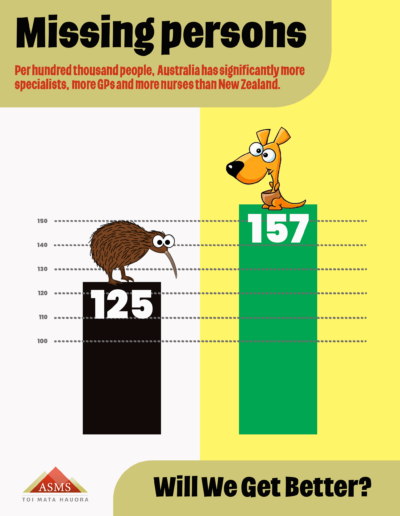 Will We Get Better – Missing persons

A BIG JOB AHEAD

When ASMS surveyed clinical leaders in 16 DHBs in 2019, those doctors thought we needed 24% more specialists to provide safe and quality service for patients in this country. Just to be proportionate to Australia, New Zealand would need approximately 1,500 extra specialists (private and public). We would also need 1,400 more GPs and a staggering 12,000 more nurses. In March 2021 there were 1,168 fulltime equivalent vacancies of nurses in DHBs excluding Waikato. There were a further 500 nursing vacancies with aged care providers. These shortages will be conservative as vacancies are in part determined by budgets rather than the staffing levels required to reasonably meet patient needs. In terms of GPs This year the Royal College of GPs reported half of GPs want to retire in the next 10 years. It is all adding to the pressure. And, without the health professionals, #willwegetbetter? 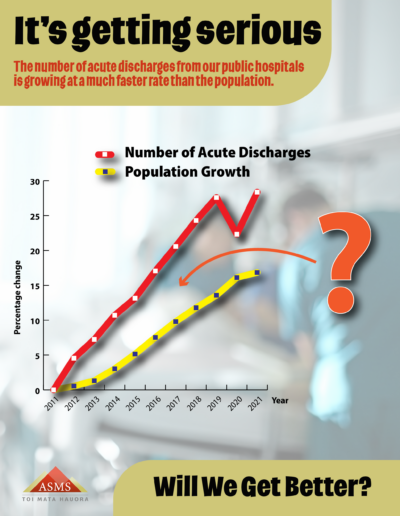 Will We Get Better – Its Getting Serious

Hospitals shouldn’t be the first stop on anyone’s health journey. But between 2011 and 2021 acute inpatient discharges in New Zealand have increased much faster than the population – 28.4% compared to 16.8%. Over the same period non-acute discharges grew by 12.4%. Covid has had an impact on these figures in recent years. But the trend is still clear. Over a decade, acute admissions have risen and are squeezing out non acute. Between August 15, 2021 (two days before the first Delta case was reported) and October 30 2021, an estimated 105,000 hospital procedures and outpatient appointments were cancelled in New Zealand due to the outbreak. All those cancelled procedures were still needed. Now they just add to the backlog of unmet need. And this winter is piling on more pressure. Sure, acute needs demand attention first. But non acute conditions still need to be addressed. Without a real increase in capacity, #willwegetbetter? 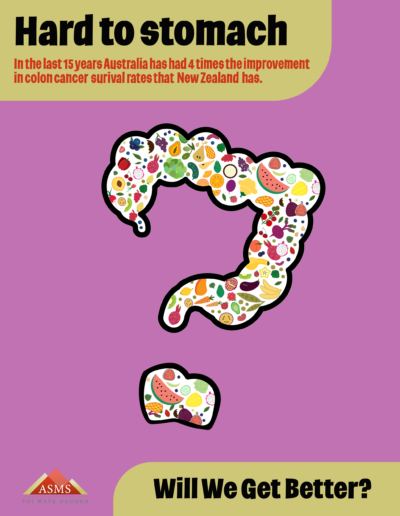 WE SHOULD BE GUTTED

New Zealand has a high incidence of cancer. Making things worse – based on a 2019 study that looked at 7 cancers in 8 countries – we have poor survival rates for cancers too. And our survival rates aren’t improving at the same speed as other countries. You’re estimated a third more likely to survive stomach cancer for 5 years in Australia compared to New Zealand; and three quarters more likely to survive pancreatic cancer. Looking at colon cancer, our 5-year survival rate of 62.1% is better than the UK and Ireland. But it’s worse than Canada, Australia, Denmark and Norway. Australia’s is 70.8%. But in the last 15 years the UK’s colon cancer survival rate improved by almost 12% and Australia’s improved by over 11%. New Zealand only improved by 2.8%. And in this same study New Zealand was the only country where the pancreatic cancer survival estimate got worse! What story do survival rates for cancer in New Zealand tell about our struggling system and, under Health NZ, #willwegetbetter?(SOURCE: “Progress in cancer survival, mortality, and incidence in seven high-income countries 1995–2014 (ICBP SURVMARK-2): a population-based study”, Melina Arnold, Mark J Rutherford, PhD, et al, Lancet Oncology 2019) 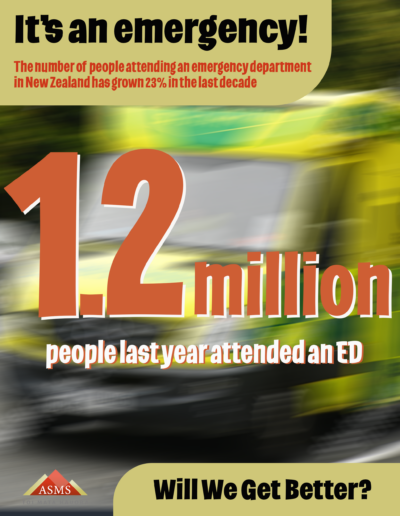 Will We Get Better – Its an Emergency

More than 1.2 million people attended hospital Emergency Departments (EDs) in the year to June 2021. This was 22.6% more than in 2011 and well above the rate of population growth. On top of increasing numbers, the severity of cases has also risen. The proportion of immediately or potentially life-threatening events (triage levels 1-3) grew from 50% in 2011 to 62% in 2021. More emergencies and, especially, more life-threatening ones are not a sign of a health system moving in the right direction. How #willwegetbetter?